It’s been a while now since I got my ray cloth warp on the loom, but it’s slow going. I have just over 2 metres woven at this point, and I have had opportunity to ponder why this is.

One thing was that I still do not have the spangles, they’re not made yet. This is very minor.

There is also the fact that my rays ended up much more wobbly than I had anticipated for the first metre or so. Additionally the black wool yarn creates fuzz which has tended to obscure the white silk of the rays. This is very clear when I’m sitting at the loom, leaning over the cloth. Less so from some distance away, but it still distracts from the very clear contrast of black wool (which eats the light) and white silk (which reflects it).

Thirdly I have had some issues of the weft popping up and creating nodules towards the selvedges. Not the selvedges themselves, but for a few cm inside of them. When I get into a nice rhythm with the shuttle I seem to leave loops of weft on the surface of my weave. To combat this I have had to slow down considerably, and carefully place each pick.

Another thing is the fact that we’re not planning on going to any events until May next year, so there is no urgency at all. Now it has been some time since I decided to never sew to a deadline, but that doesn’t mean that my projects do not have a goal. The thing that has consistantly brought me joy with my crafts in the SCA is that there is a practical purpose driving their creation.

Instead, I have found my way back to making scrolls, which are things I can make at home, with a use and much shorter deadlines. Perhaps I might even finish the peerage scroll that is my guilty conscience. I have invited people for a scribal day this upcoming weekend, so I shall pull out the manuscript that was based on and practice, practice, practice. 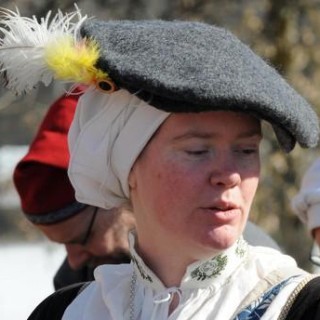